Just a a bit of a quick update to talk a little about the projects I currently have running, at least model wise at least.

Infinity:
Although I know have three Infinity forces in the shape of Haqqislam, US Ariadna and now Bukunin Nomads, the Haqq are the only force currently getting any love giving that I've been using them for Strikezone: Wotan, the most recent of the Infinity global campaigns that has just ended.

The Haqq force also has the most models and I've also owned them for the longest amount of time, so it only seems fitting that I at least start to paint them first!

I've started out with the three Ghulam models from the older Haqq starter kit, though only one of the models really has any progress despite all three of them having been giving base colours. 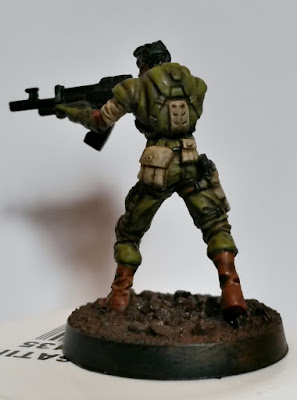 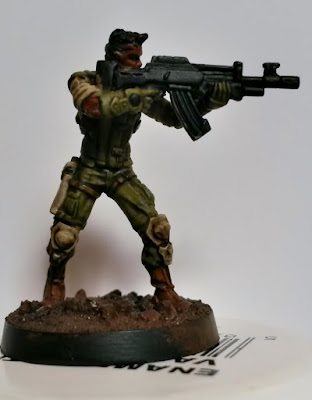 Terrain:
As far as terrain goes, I'm mostly trying to focus on making enough so that our group can start playing Frostgrave. 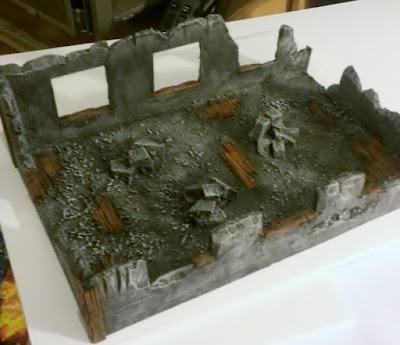 So I've been making ruins out of foam card. The one above is the first of two that I've made so far, though I still need to paint the second.
They've been fun to make and have been a nice change of pace to painting models and gives me something to do in the evenings as I'm not a massive fan of painting without natural light. (I really should invest in some daylight blubs.)

As for that, those are the current projects. I've got a Frostgrave warband built, but its on the backburner at least until I've made enough terrain to play on a 4x4 board.

Posted by Northern_Fox at 05:58 No comments:

Ah, another new attempt at a blog...

I am not great at keeping blogs.

In fact, I am not really great with consistency as a whole. It's probably one of my biggest weaknesses.

But alas, I am ready to try something again, even if it just ends up being just for me. Honestly, I think I need to try it again, you know, what with lifes general ups and downs. Having some place to talk about my hobbies and interests online might do me some good, given some of the events that have happened to me over the last year or so.

If anyone reading this wants to see some of my older miniatures then feel free to check out the following; Lauinav's model making escapades and My Deviant Art.

My Deviant Art is sort of, semi active? In that I still log on to it, but other than that, they are both dead. The older blog especially.

Speaking of the older blog, I will probably keep one or two of the little ideas from there, like the points system and the New Model Fund, but we'll see.

This blog won't just be able models though. I shall more than likely use it for my board game exploits as well as some stuff to do with roleplaying games.
I did have a blog that detailed some of the games that I was running over the last few years, but sadly I seem to recall it being deleted, so a fresh start it will have to be!
Posted by Northern_Fox at 15:32 No comments:

I'm a blokie bloke bloke from the North East of England who likes playing with toy soldiers, pretends he is a wizard and who who rolls some dice.
This blog chronicles some of what I do. Feel free to have a read of some stuff.

Goal: To have £150 by the end of the year.
Money from model sales:
Money from penny jar:
Money from work tips.
Total:
New models bought:

In order to motivate myself to paint, I'll give each model a score based upon its size, and once I hit goals, I can reward myself with some of the New Model Fund!
Infantry: 1 point
Large Infantry, Bikes etc: 2 points
Monsters/Dreadnoughts: 5 points
Vehicles: 10 points
My aim for 2017 is to score 100 points.
(I may or may not include the building and painting of terrain)